Some hours passed as Barry tried to sleep! She tried counting sheep; she tried reading; she even tried singing to herself. Nothing helped! Barry then opened her iPad and went to the site that was listed on the printed map she had stolen from her sister. http://www.RingofDestiny.com.au ! She was not supposed to travel to the Internet alone and she was sure that there would be a block on the site. However, within seconds the site map appeared on her screen and she began to follow the clues to the location of a strange new world online.

The map, and its myriad of pathways, was not clear to her and she had trouble understanding some of the language. Some clues seemed to be written in Velen, the language of the WoW tribes. Barry had heard of the stories of World of Warcraft adventures from her friends at school. Now she was getting scared as she read more about the WoW characters who frequented this strange and ancient land. Her eyes widened in terror as she flipped the page and found the latest addition to the landscape of WoW called Legion. Barry read all about Legion in Wikipedia.

World of Warcraft: Legion is the sixth expansion set in the massively multiplayer online role-playing game

One of the artifacts in Legion is the Sargerite Keystone set into the Ring of Destiny, located in the Tomb of Sargeras

There she found a link to the same ebook that her big sister had found, and a further link to download the secret map. She read the instructions carefully!

Follow the map to Find the clues to Open the portal and Reach the tomb in the Alley of Baba!

These words were embedded within the map now showing on her screen. “Maybe this is what Harry had been talking about” she whispered to herself. She really had been eavesdropping on her sisters.

Barry used all her iPad skills to navigate to each place on the map; she used single digit clicking and double clicking; three finger sliding and rocking the iPad to see more of the map in 360 degree views. As she did the clicking, sliding and rocking; new and wonderful elements appeared on screen. Some immediately activated videos; WoW characters began leaping about and speaking in Velen. Barry quickly reduced the volume of the audio on her iPad and dived under the bedclothes.

What Barry did not know was that embedded within the map was a secret Portal, one that could only be opened by simultaneous sliding and clicking. It was during one of those movements that she stumbled into the Sargeras Portal and began to spiral downwards into a vast vortex – out of control.

Down and down she fell at such a speed that her ears began to ring and she felt like she was going to black out. Dizzy and dazed she landed with a splat in a cave at the bottom of the vortex. 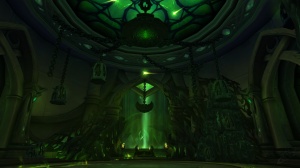 Nervously Barry stood up and looked around her in amazement. The walls of the cave were smooth and rounded interrupted every twenty paces or so with niches in which there were rows of human skulls piled on top of each other. Candles set inside several of the skulls, cast great shadows on the walls and the sandy floor of the cave. Long corridors could be seen leading off into the darkest regions of the cave. There were four oblong carpets placed at the openings of these corridors. In the center of the cave, where the carpets joined, was a stone table.

Barry looked up and could see the yawning mouth of the portal through which she had fallen. Inside it the vortex was still spinning wildly and as she watched, the map spun out of the vortex and onto the floor of the cave. Barry picked up the map and walked over to the stone table. She could see a bottle of some green fluid with a large label attached that read: DRINK ME! Next to that was a blue iced cake with a label that read: EAT ME! Wisely she avoided both of those, remembering another adventure by another little girl in her story books. Instead she reached out for the remaining object on the table, a book, to get a closer look.

This book was covered in red leather and as she held it the ink from the words inside began to flow up her arm! She dropped it in fright and peered closely at the words that were forming on her skin.

TAKE THE RED PATH
BEWARE THE GUARDIANS
ANSWER IN TRUTH
DESTINY IS YOURS!

She could feel a strange tingling sensation as the words became clearer.

She looked closely at each carpet and noticed one which was predominantly red in colour. Clutching her map and rubbing her arm, she ran to the red-carpet pathway.

As she stepped onto the carpet it lifted and shifted and she found herself on a flying carpet moving slowly down the red path.

Preserving history, one story at a time.

Presenting and Preserving the Past

This is the website for Lifelines Research, a genealogical research business run by Dave Annal

Who Am I? Family Tree Research

... stories of significant others ...

Dig Up Your Ancestors
The Chiddicks Family Tree